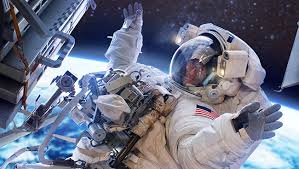 Expedition 14/15 flight engineer Suni Williams, KD5PLB, during a spacewalk earlier in her stay aboard the ISS. The spacesuits weight about 800 lbs on Earth but are nearly weightless in space. [NASA Photo]

NEWINGTON, CT, May 4, 2007 — Now part of the ISS Expedition 15 crew, US astronaut Suni Williams, KD5PLB, has continued her run of successful Amateur Radio on the International Space Station (ARISS) school contacts. In late April, she enlightened youngsters in Italy, Germany Virginia and Illinois about what it’s like to live aboard the ISS. Williams has been in space since December and is scheduled to return home next month via the space shuttle that will bring her replacement. During the first of two ham radio conversations on April 23 with students at the Scuola Europea Varese in Varese, Italy, Williams allowed that she’s growing tired of space meals.

“They were tasty for the first couple of months, but now it’s getting a little bit old, because the menu sort of repeats,” Williams responded. “It’s about a 10-day cycle, and then you start eating the same things over and over again, so I try to be creative and mix new things with each other.”

Shane Lynd, VK4KHZ, served as the Earth station for the event. Students at the school spent about three months learning about the ISS. The Scuola Europea Varese is an international co-ed school with an enrollment of 1300 students, pre-school through high school, from all over Europe. An audience of about 300 looked on during the contact, which attracted media coverage from newspapers and television.

A few hours later, youngsters at Kingston Elementary School in Virginia Beach, Virginia, spoke with Williams during a direct VHF contact between NA1SS and control op Ed Williams, KN4KL. Thirteen Kingston third through fifth graders participated in the event, while the rest of the schools nearly 600 students watched via closed-circuit TV. The father of one of the pupils, Julia, had graduated from the US Naval Academy with Williams, and they later served on helicopter squadrons in nearby Norfolk. Julia wanted to know how long it took to prepare for a spacewalk.

“Well, it takes a little while,” Williams explained. “It’s sort of like when you’re going diving. We’re going to breathe 100 percent oxygen, and so we have to make sure that we get all the nitrogen out of our system. So that’s the longest preparation time, and then we have to get the spacesuits ready.” She said it typically takes four to five hours before the astronauts are ready to open the hatch and go out into space.

Members of the Virginia Beach Amateur Radio Club (VBARC) provided the ground station and support for the ARISS event, which was the subject of a newspaper article in the Virginian Pilot. (The ARRL Virginia Section Web site has a copy of the article and additional information on this event.)

Two days later, about a dozen youngsters attending Christian Life Elementary School in Rockford, Illinois, had their “day in space.” Youngsters there chatted with Williams at the helm of NA1SS via Earth station control operator Shari Harlan, N9SH. Williams told one questioner that she believes the next step for the human spaceflight program is to return to the moon.

“We’ve got a lot that we can learn from living in a different type of gravity environment if we want to explore further, potentially go out to Mars or some other part of the universe,” she said. “If we’re only at the moon, we’ll have only a small delay in communication — maybe a two-second delay — and we need to learn how to work autonomously without always [having] the help of the ground. It would be nice to have a moon base to see how that would work and see if we can still survive there.”

Upward of 1000 students looked on during the ARISS QSO, and audio and video were fed live to a local Amateur TV repeater.

On April 28, Williams fielded more questions from students at the Samuel von Pufendorf Gymnasium, a middle and high school of some 675 students in Floeha, Germany. The direct contact was between NA1SS and the school’s Amateur Radio club station DL0GYM, with Harald Schoenwitz, DL2HSC, as the control operator. All of the students who took part in the event had obtained their Amateur Radio licenses in advance of the contact.

Williams answered 18 of the youngster’s questions on various topics. She told the students she wished the ISS had Internet access. “It really would be helpful,” she remarked. She noted the crew does have access to e-mail, however. She also said that the crew can see the northern lights from above, and on one occasion, an aurora occurred during a space walk. “It was a little creepy to see the green lights flashing,” she said.

The possible effects of global warming are evident from the space station as well, Williams reported. “I can definitely see differences in the glaciers in the Himalayas and in South America,” she said.

About 50 people plus news media looked on as the approximately 10-minute contact progressed flawlessly. Five newspapers, three radio stations and the regional TV channel reported on the event. The von Pufendorf contact was the 290th since the ARISS program began coordinating ham radio events for schools when the first space station crew came aboard in November 2000.

ARISS is an international educational outreach with US participation by ARRL, AMSAT and NASA.