Amateur Radio Service is Governed by 3 pieces of legislation:

Radio Communications Act contains:
1. Requirements to obtain license    2. Penalites for failure to do so

The Act states that you cannot:
install, operate or possess a device capable of transmitting electromagnetic waves lower than 3000GHz  without being licenced in accordance with the Act.  Also, the equipment must be located in a place with a station license.

Sanctions under the Act

is the portion of the band that your transmitted signal occupies:

** All modern transceivers meet these 3 requirements.

** Station does not mean transmitter, so, station may have many transmitters operating simultaneously

Amateur stations have the authority to communicate any message that relates to an emergency (earthquake, flood, tornado) on behalf of any person, government, or relief organization.

Distress: – grave and imminent danger, need immediate assistance: “MAYDAY, MAYDAY, MAYDAY, CALLSIGN”  Repeat until you get a response. Priority over all other communication.

The frequency allocations for Canada in ITU Region 2 are: 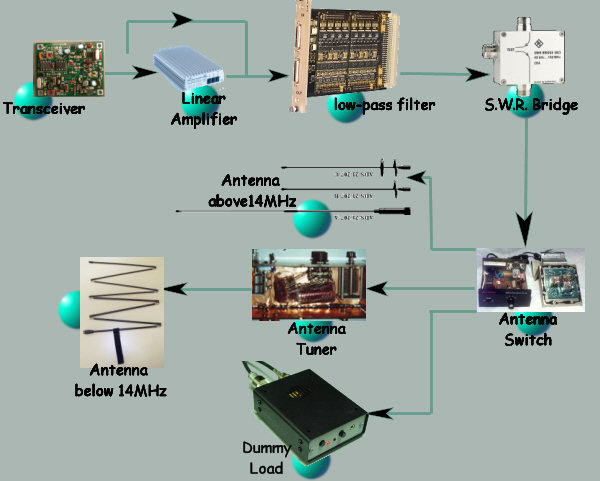 Current (I) is the flow of electrons through a conductor, and is measured in amperes (A).

Voltage (E) is the electrical pressure, or electromotive force, that causes the electrons to flow, and is measured in volts (V).

Analogy: If you compare electric current to water flowing through a pipe, then voltage is like the water pressure.

The ampere is named for André Marie Ampère, a mathematician and physicist who made major contributions to the theory of electromagnetism.

The volt is named for Alessandro Giuseppe Antonio Anastasio Volta, a pioneer in the study of electricity and inventor of the electric battery.

A series circuit is wired so that current passes through a series of components, one after the other.

Note: What matters here is the wiring, not the physical arrangement of the components.

An ohm is defined as the resistance of a circuit in which a 1 ampere current flows when 1 volt is applied.